We have implemented new weapons into the game and will keep expanding on the arsenal. Some older weapon models have been updated as well.

Certain UI elements have been overhauled, such as item icons, action bar, and equipment, item slots now include a durability bar on the right side to allow easy visibility of the current durability on the item.

Functional implants have been added to the game, each one has a specific functionality when turned on, such as the shield implant providing dynamic resistance controllable by a UI slider, resistance amp giving health regen, etc. Implants drain bioenergy every second when turned on, you can replenish bioenergy by consuming biocells.

The game has received tons of updates, each one mentioned in the #mr-patchnotes discord channel, which is one of the main reasons why development updates have slowed down and mainly reserved for big content updates. 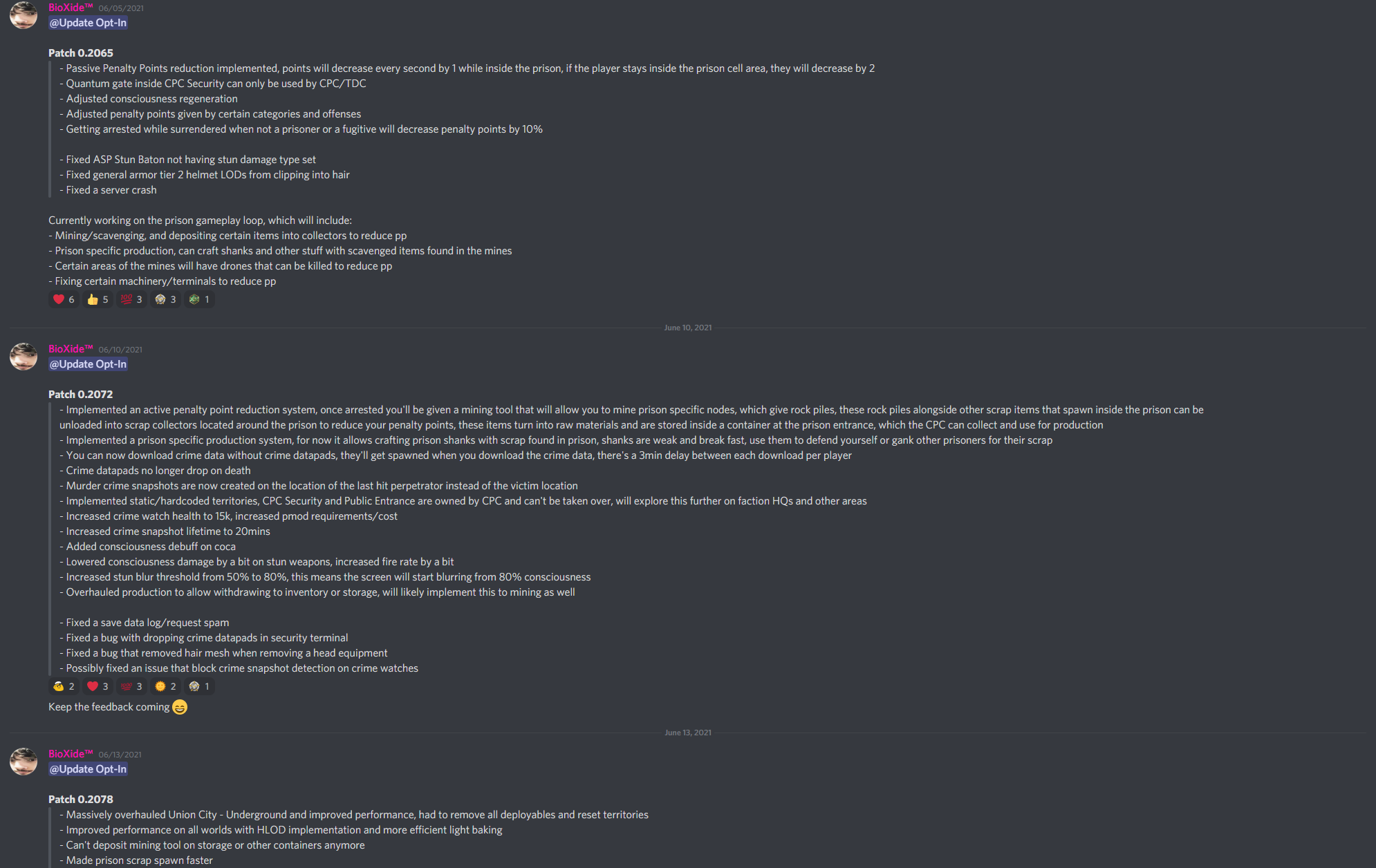 To promote better visibility between different factions, armors will now have a colored glow to them that changes depending on your faction, this allows easier identification of factions through their armor set. This was done to prevent having to increase the brightness of armor textures, we can keep using dark and gritty colors on armor with this new armor glow feature, you can also turn this on/off in the options, under gameplay settings.

Hidden stashes don’t have a yellow outline, which makes them perfect for hiding items in worlds.

The crime system needed the surrender and stunning animations to work in order to allow the system to fully function, using this as an initiative to create the new animation framework, which allows us to define and play animations without interfering with other animations such as firing, reloads, etc. This allowed us to finally implement emotes, which we have over 70+ at the moment and will be adding a lot more as time goes on. The system makes it very easy to set up new animations in just a few minutes and have them work right out of the box. The entire system that allowed visually representing anything worn on players has been completely re-written from scratch, previously they were “hardcoded” mesh components in the characters, this was a huge task and required a lot of coding and hard work. The wearable system dynamically adds and removes any worn items on players, it also supports modding, such as being able to add sights to weapons, change colors, etc. This is a lot more efficient, both on performance and usability, and will allow us to further expand all the cool stuff that players will be able to wear in the future.

All our armor sets have been replaced with custom-made ones by our 3d Artist Nick, which also includes gloves for each set. 7 different armor sets made by 6 pieces, including gloves, 8 different faction variations.

AI loot will be overhauled, they will no longer drop credits and instead, their loot tables will be adjusted to drop scrap items, think of alien/robot parts, such as brains, claws, etc. This new item type will be used for new production recipes or alternate ones, allowing combat-focused players to provide another source of production materials.

The crime system has been finally implemented and it’s composed of multiple parts which we’ll go over individually. Most of its settings can be tweaked using a config file, which allows us to make quick modifications to most of the systems and have it reflected in-game after a server restart. This will be later moved to our backend, which will allow CPC HC to modify most of these settings in the faction management panel.

As criminal detection methods in the Union grew more complex there became a need to keep track of crime in more than just report form. Where reports had traditionally been given a date code and sequential number the sheer volume of crime across the union made keeping track of reports a near-impossible task, even with advances in databases and computer processing.

The solution was the Crime Identification Number or CIN (commonly pronounced ‘sin’). This consists of a three-digit code that identifies the type of criminal offense, a letter code (currently C), and a randomly generated ten-digit number that acts as a unique identifier. Each CIN is kept on the CPC database so that investigators, courts, and auditors can keep track of offenses.

Possession of Restricted Weapon or Implant – 643

Possession of a Category B Narcotic – 390

Possession of a Military Weapon or Implant  Without a Permit – 951

Possession of an Illegal Weapon or Implant – 466

Possession of a Category A Narcotic – 320

Crimes Against the Union – 507

Now when you use any weapon, you’ll be combat locked, which prevents you from leaving the world you’re in for 30 secs, the timer refreshes when you attack again. 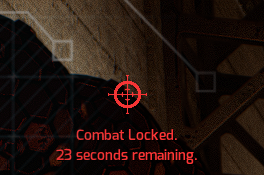 Depending on your penalty points you’ll be assigned to a crime status, which are:

Also, you’ll be assigned a Fugitive if you manage to escape the prison. In the future, there will be certain perks or cons you’ll receive depending on your crime status.

This new and complex system creates “snapshots” or objects in the world that contain crime data, for instance, murdering a player will create a snapshot on the perpetrator’s location when the crime was committed, the snapshot will store all relevant information about the crime, such as the date and time, the victim, the crime identification number, what type of crime it was, the instigators, location of the crime, etc. This snapshot will stay in the world for up to 20 minutes, players with active scanners will be able to view snapshots by scanning them, which reveals the crime data and gives them the option of downloading it, Crime Watch deployables can scan nearby crime watches and instantly penalize instigators. The way the system was set up will allow us to dynamically change any snapshot or create new ones with minimal effort. It’s also very efficiently coded and networked, there can be hundreds of snapshots in the world and it won’t cause any performance issues. We hope this system creates a fun and engaging crime system, allowing an actual investigator role to properly play out and be supported by game mechanics, as crimes have to be scanned and uploaded to be properly penalized.

This new deployable has the same detection system as turrets, it keeps track of players in its line of sight and “watches” them, if they are caught committing crimes (which is defined by crime snapshots that are spawned) they will be penalized instantly, not requiring the manual process of scanning, uploading and penalizing. The newly implemented scan implant can be used by faction, as it’s primarily a frisking tool, allowing you to see the player’s inventory and their penalty points, however, CPC can penalize players if they have illegal items in their inventory after a successful scan. Players can also scan crime snapshots to see the crime data and download a copy, which creates a crime datapad storing the crime data.

Illegal items are defined by categories and are non-static, which means we can modify what items are illegal and what their penalty points are, here are the categories: Crime datapads can be received from scanning crime snapshots and downloading their data, these can be uploaded into CPC security terminals to successfully report crimes. The crime data can be viewed by using the crime data item in the inventory, which gives you all the information of the committed crime, multiple copies can be created from the same crime, which will give players the tools to support a court cases. 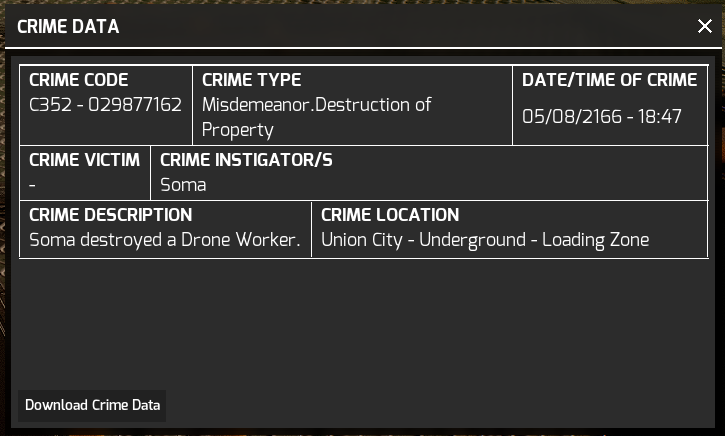 These allow players to upload crime datapad to the CPC database, which stores all crimes reported by players.

Located inside Ceres CPC Security, this terminal contains a database of all newly reported crimes and a log of processed crimes. Reported crimes can be processed by a specific rank of CPC, once processed, it will penalize all the crime instigators with penalty points and clear the crime off the database to make space for new ones.

Stun weapons have been added to the game, these can only be used by CPC and are rank locked. When getting hit by stun weapons, your consciousness will decrease and your vision will get blurry, once it reaches 5%, you’ll be unable to move or perform actions. You can increase your consciousness resistance by wearing ballistic armor and using consciousness boosters.

Penalty points are given to players who get penalized for committing crimes, 1 penalty point equals 1 second in prison.

Players that are arrested are sent to the Ceres prison for rehabilitation, their penalty points will be decreased by 1 per second, the prison contains a mining area where they can use the “Convict Rehabilitation Tool” which is a mining tool specifically built for prison use, this allows prisoners to mine rocks and unload them into Scrap Collectors which decrease their penalty points. Other scraps also spawn in the prison, such as metal and wood scrap, which can be scavenged and unloaded to reduce your prison sentence. These scrap items can be retrieved by the CPC on the Scrap Receiver terminal and used for production purposes, or they can be used by prisoners to make shanks and possibly other prison-specific tools.

Our artist has been creating a bunch of new different drug models that we’ll be implementing soon into the upcoming drug overhaul. Some of these are low Level of Detail due to being small items in-game.

Industrial is our newest world, a new district of Union City, it contains a few businesses, a spaceport, office buildings, a faction headquarters, an underground mining area, a nightclub with multiple floors, and connected to a web of underground tunnels and a subway station. This district will be used as the main production hub on Earth in the future, splitting production into multiple territories on the level.

This is the most played level in the pre-alpha, alongside Mars, so it was due to get additional love at some point. Our level designer Asserius has massively overhauled the entire level, expanding most of the play areas and adding more verticality, the amount of services it provided hasn’t been changed, but the layout has been shifted around dramatically.

Things might be slowing down in the upcoming months due to the implementation of our new backend system, which will finally let us advance into alpha, and other non-development tasks that require a lot of time. I will be exploring new crowdfunding ventures, self-funding opportunities, or investors. It’s been 4 long years as a solo-dev taking on a huge project like this, I need to start planning out how to scale the development of this game so we can finally have a real production going into beta and release, appreciate the patience and understanding.

You can follow the development of the game by going into the roadmap here (Needs more love):

or the pre-alpha board which is more active and descriptive of the current tasks:

I slack a lot with updating trello consistently as I have a nice routine and reliance on pen and paper for task management, I’ve gone over 2 notebooks front to back and currently on my third one, things might not move on the board sometimes but there’s always work being done on a daily basis.

Some videos of a few fun duels I had with the community on the new “spot” for Union City – Underground, if you’re into the combat aspects.